Client of the Month: Jade 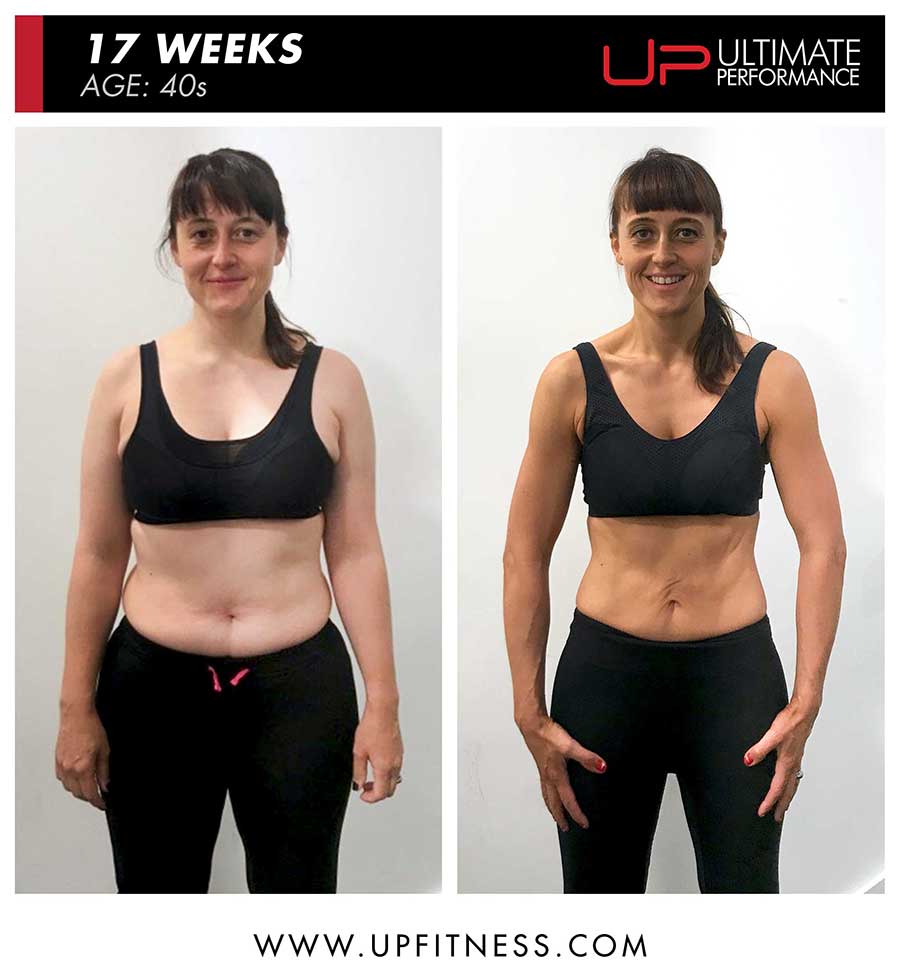 When her mum passed away, Jade was forced her to take a long hard look at her own health and lifestyle.

For years, Jade had worked hard and partied harder, using alcohol, pub food and nights out with friends to cope with her high-stress career.

But the catalyst was seeing her brave mum fighting a neurodegenerative disorder that was slowly robbing her of her strength and her ability to move.

“My mum actually suffered from motor neurone disease, and she died in February, and over the last two years of her life, I saw her struggle with her movement, but she never gave up.

“I remember her walking down the hall supported by her carers, trying to improve on the number of steps she took.

“When she died, it struck me how much I was taking my movement for granted. It was like she’d given me a kick up the arse and told me to get fit and not to take my body for granted. I joined U.P. a week after!

“She would have been proud.”

When she started at Ultimate Performance London City, Jade weighed close to 80kg and had a lifetime of unhealthy habits she wanted to shift.

By the time she completed her transformation programme, Jade had lost 16kg and gained a wholesome new lifestyle that centred around being active, exercising and eating well rather than the office, the pub and alcohol.

“I feel very proud of what I’ve achieved, and I don’t want to stop. For the first time, I actually feel fit and strong.

“It has given me confidence that I really feel now that I can achieve whatever I put my mind to, and it’s a great feeling.” 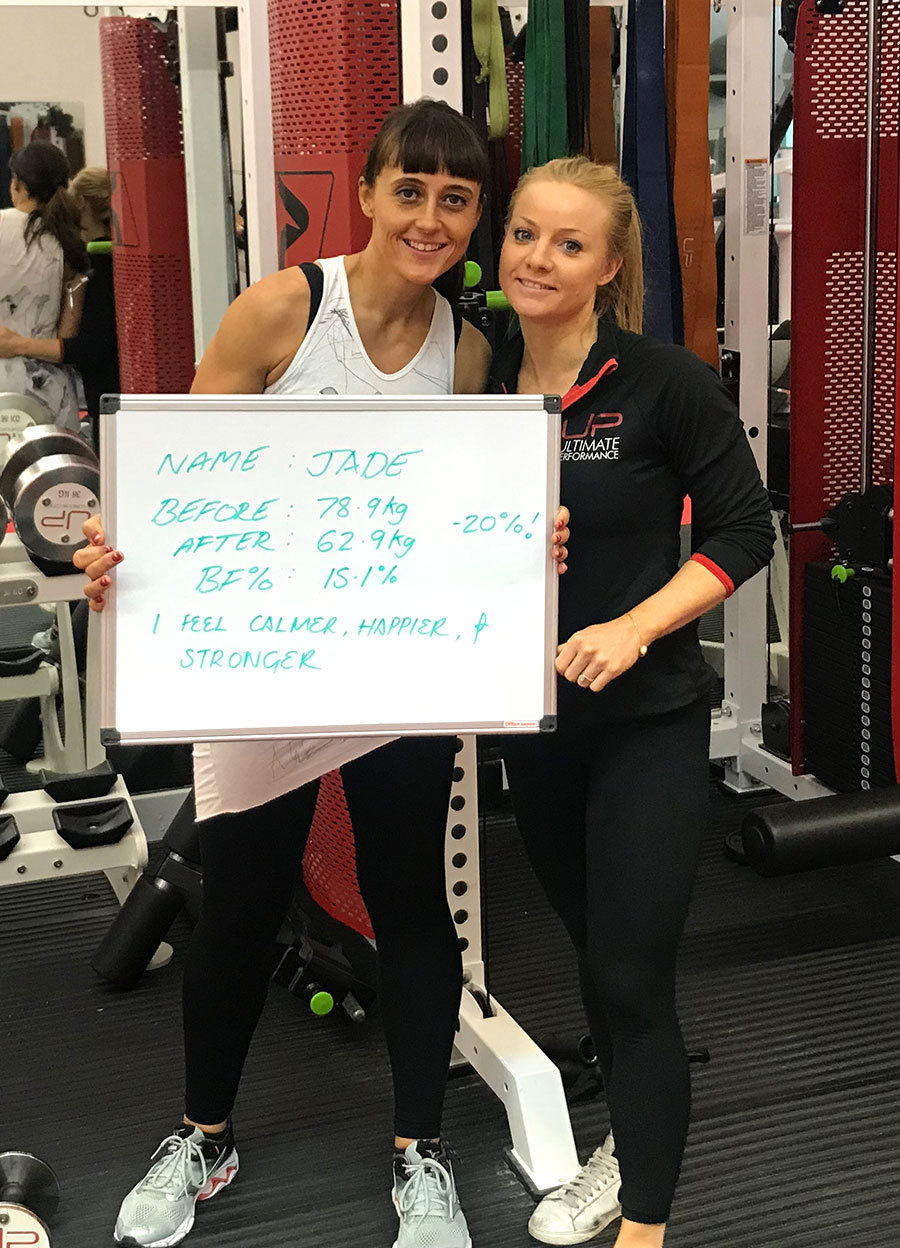 Jade’s transformation has been a revelation to her, but at first it was tough to change tracks.

‘Old habits die hard’, as they say, but luckily Jade had all the support she needed to succeed from her trainer, Rebecca.

“Before I started U.P., I was most often found either at my desk or in the pub, but U.P. give me another alternative, and it’s just been great to focus on me.

“It was really hard at first. It can be overwhelming as there are so many things to juggle, and the first few months hit me like a steam train.

“But now I have loads of energy, and I love it. The sessions are great. The atmosphere in the gym is fantastic. Everyone is so supportive. It’s now something that’s become a habit.”

“For the past 20 years, I’ve been locked in a constant battle with my body – name a fad diet, I’ve been on it. I was stressed, lacking in energy, overweight, and drinking too much. U.P. has helped me change this.” 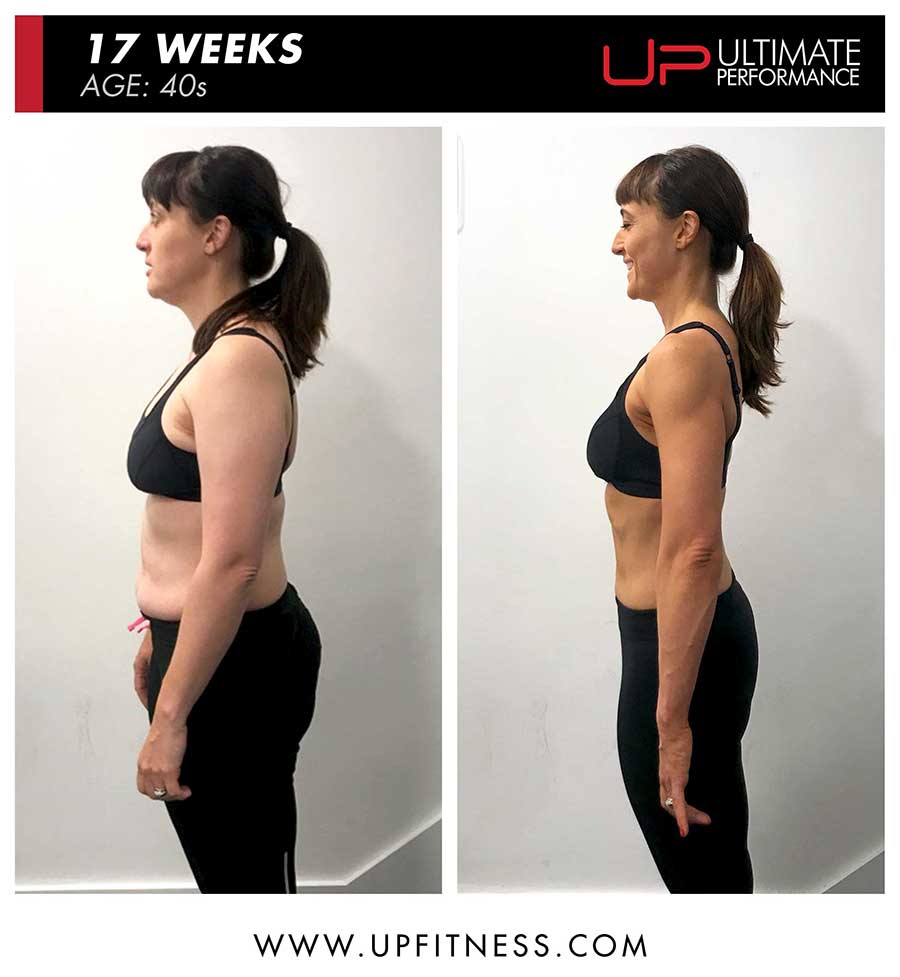 START FEELING STRONG IN YOUR OWN SKIN.
JOIN OUR PERSONAL TRAINING TODAY AND TRANSFORM YOUR FITNESS.

Jade had done countless diets – from keto to Weight Watchers – as well as personal training before, but nothing had been as effective as U.P.

She sees U.P.’s holistic approach as the key differentiator that got her to her goal.

“The combination of the four key elements of diet, strength, cardio, and movement has really worked for me.

“Also, having my trainer, Rebecca, watch me and coach me and knowing that if I didn’t fill in my tracker or if I slipped up, she would be on my case, also helped me stay focused.” 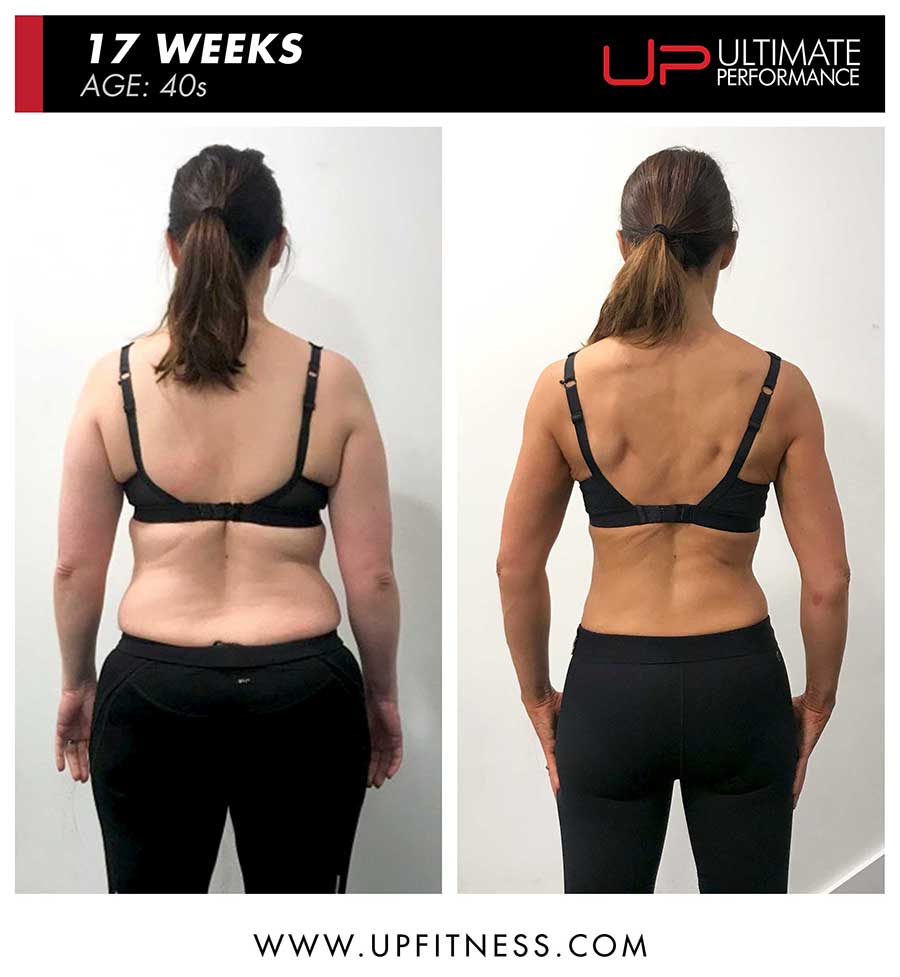 Jade credits her time at U.P. for her incredible lifestyle change. She has turned her life around. Gone are the nightly drinking sessions at the pub. She now has found a different, and much healthier form of stress release in fitness.

“I’ve never felt capable within my body. I’ve always had issues, and it’s felt like I’ve been in a battle with my body forever.

“Since I’ve started U.P., for the first time, I’ve really felt strong. I’ve been thin before but never strong.

“The biggest thing I’ve learnt in this process is I actually now enjoy being fit. Before, I tended to use alcohol and sitting in the pub as a form of stress release, but now I’ve started meeting friends to go to the gym – I never thought that would happen. (I’ve even made some new U.P. friends!)

“I would say my whole lifestyle has shifted. I’m drinking far less, and I’m moving a lot more. I don’t sit down. I have so much more energy, which means I get much more done. I’m calmer and happier without doubt, as I’m not fighting with my body anymore.”

Personal training with U.P. can transform your life in all aspects.
Speak to us today to find out how you can start your own transformation. 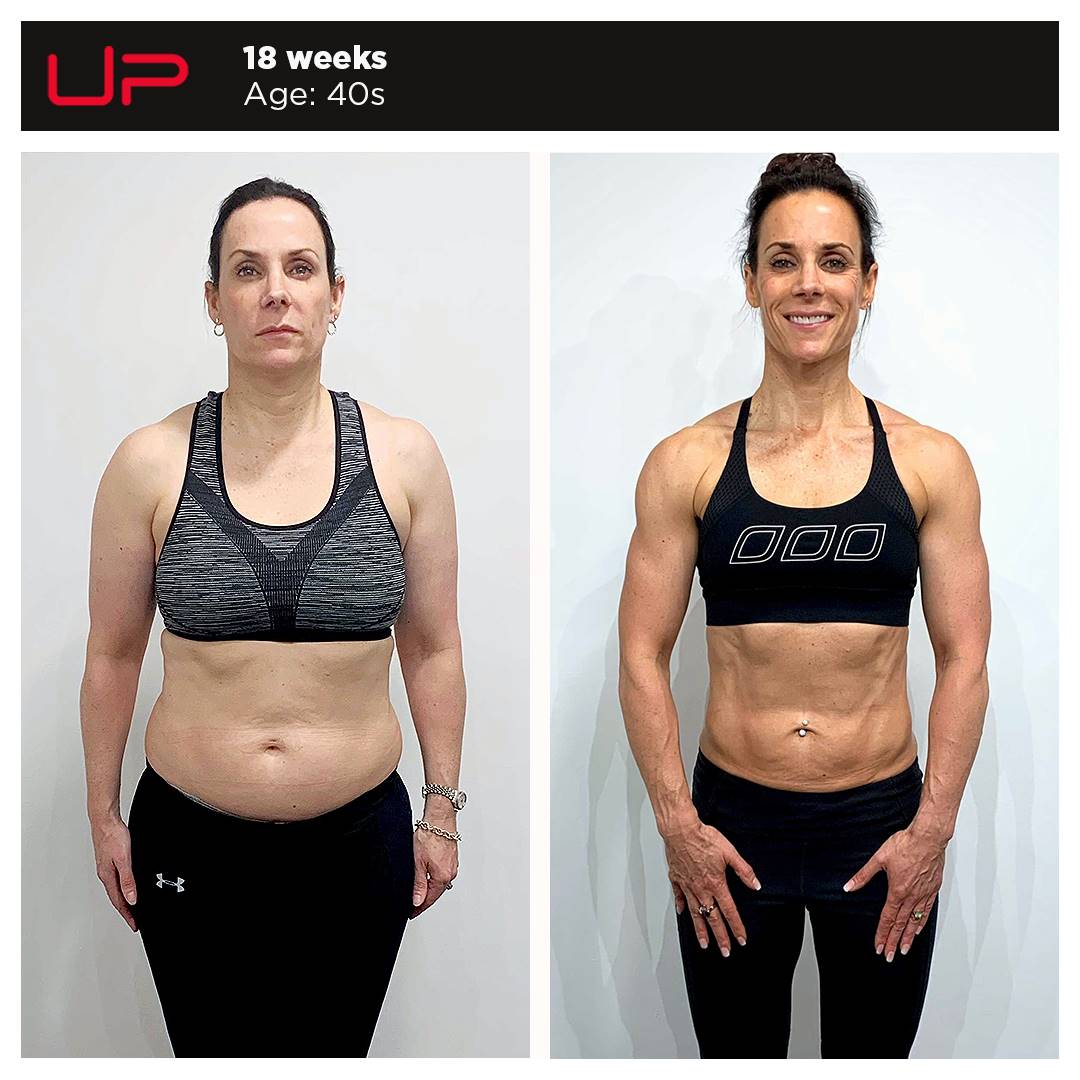 Sarah Turned Back the Clock 20 Years at U.P. 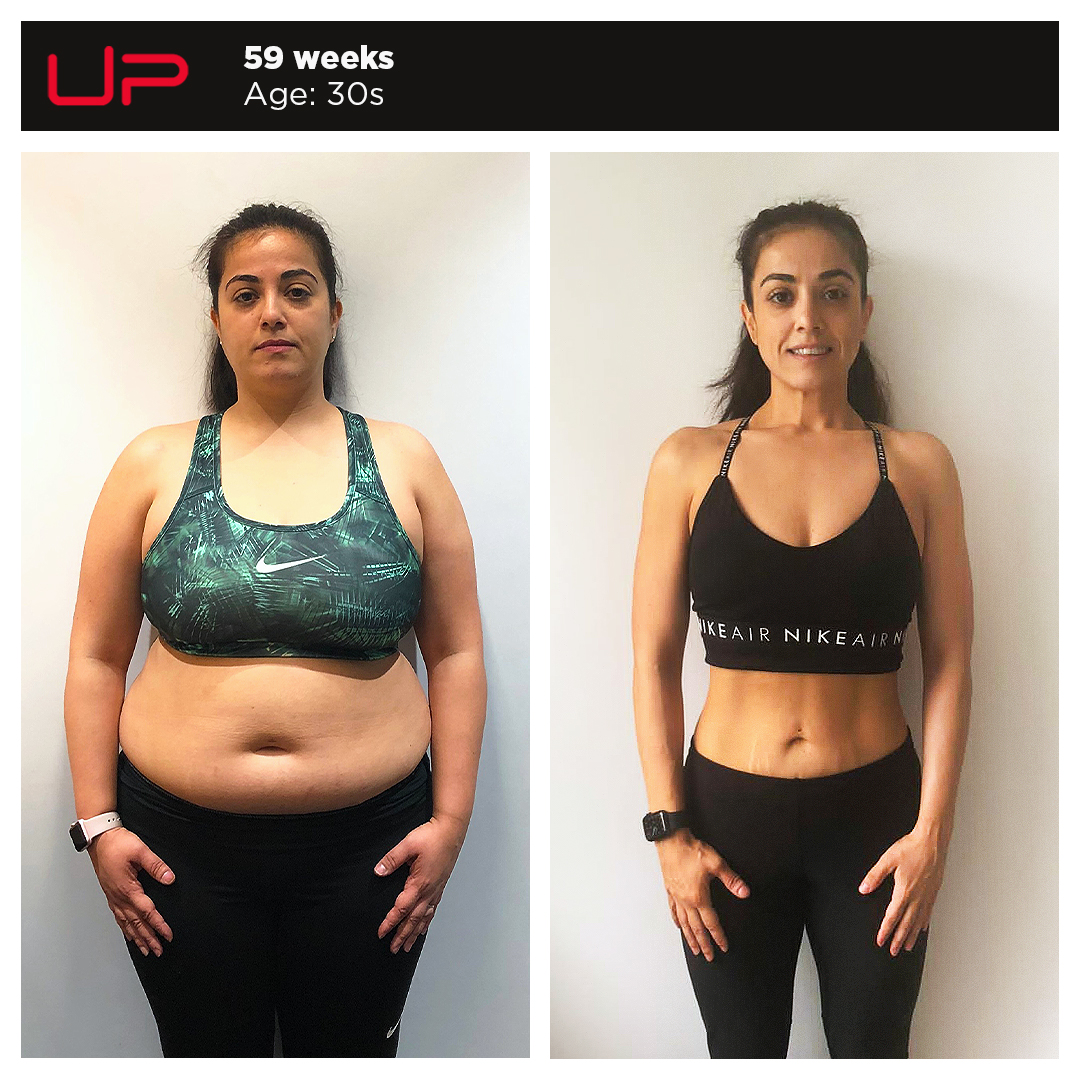 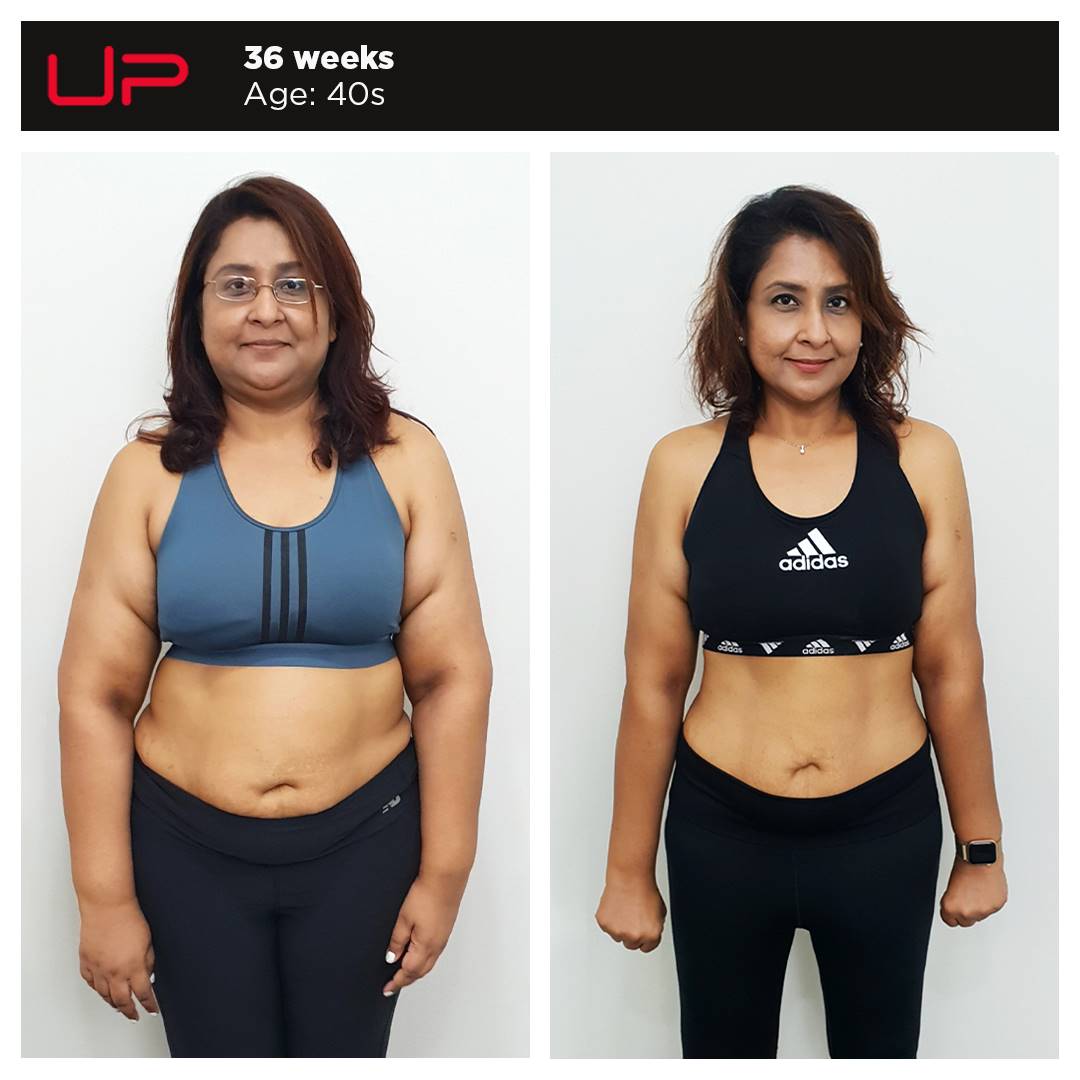